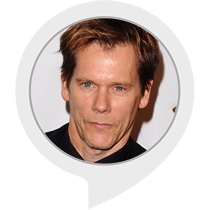 (NOTE: This skill is not affiliated with, or endorsed by, “Kevin Bacon” or “Six Degrees” in any way)

Name a celebrity, and the skill will find a link between the celebrity you name and the actor Kevin Bacon. A link is considered when the two celebrities are in the same movie. The number of “steps” to form the link is known as the “Bacon Number”.